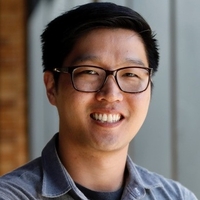 Biography
Edwin Chang joined Pixar Animation Studios in 2005 as a global technology intern and has since worked in simulation and crowds on several Academy Award-winning films such as Up, Inside Out, and Coco. He also worked on theme park attractions including Finding Nemo Submarine Voyage and Toy Story Midway Mania! Chang was the Simulation Supervisor on Inside Out and the Crowds and Simulation Supervisor on Cars 3. Chang wrote and directed Wind, which is part of Pixar’s SparkShorts program and is currently streaming on Disney+. Most recently, he worked in simulation on Soul which will debut on Disney+ on December 25, 2020. Chang is currently the Shot Supervisor on an unannounced Pixar project.

Raised in Hancock Park and Koreatown in Los Angeles, Chang first explored animation and computer graphics in high school. He went on to participate in a summer program in animation at the California Institute for the Arts (CSSSA), and studied computer science and art semiotics at Brown University, leading to his internship with Pixar. After graduating, he returned to Pixar and has been there ever since.