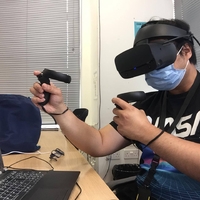 Biography
Firdaus is a VR Artist from Liverpool, United Kingdom. He has been making art since young, and his artwork had been showcased in many countries such as USA, Russia, China, Italy, Malaysia, and many more. He has been very passionate in the world of creative content creation, hence explained his experiences in making video games, animation, toys, comics, and of course virtual reality and augmented reality. All these experiences accumulated up from when he was a comic content writer, to earning a Master in Computer Games Technology, up until he became a Games Designer himself. Today, Firdaus continues his journey of aesthetics via virtual reality art and captivate many with his meaningful VR art style.
Presentations
Art Gallery
Love: Greatest Mystery of Life