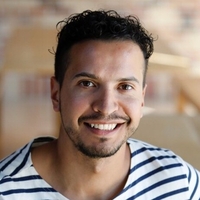 Biography
Jesús Martínez joined Pixar Animation Studios in January 2009. He has since worked on the feature films Monsters University and The Good Dinosaur, and Academy Award-winning Toy Story 3, Inside Out, and Coco. Most recently, he was the Effects Manager on Onward. Martínez also produced the Pixar SparkShorts Wind, available on Disney+.

As a department manager, Martínez partners with the producers and creative leads of departments to help guide and lead the teams producing specific work in the pipeline for the film. The focus is to keep creative engagement and productivity up, while staying on schedule and resolving any issues with shifting priorities or complexities that arise.