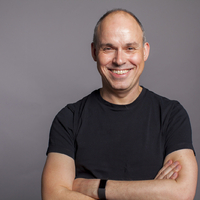 Biography
Paul Franklin is one of the world’s leading visual effects designers with over 30 years of experience in filmmaking, two Academy Awards and two BAFTAs to his name.

Paul started out by making short films with his friends at university whilst studying Fine Art in the 1980s, which is where he first worked with digital imaging systems. After graduation Paul became one of the first 3D computer animators working in the

British video games industry before moving into television where he worked on a wide variety of television commercials and broadcast shows. In the mid 1990s, Paul moved into feature film VFX, creating animated sequences for the films ‘Hackers’ and ‘The Borrowers’, and in 1998 he became one of the co-founders of Double Negative, setting up the new company’s 3D animation
department.

Paul supervised visual effects for all three films in Christopher Nolan’s Dark Knight Trilogy, earning his first Academy Award nomination for his work on ‘The Dark Knight’. Paul then went on to design and supervise the visual effects for Nolan’s ‘Inception’ and ‘Interstellar’, winning Academy Awards for both films. He has also received five BAFTA nominations for his work, resulting in two wins.

Paul serves as DNEG’s Creative Director, overseeing a wide range of projects within the company. His work as a visual effects supervisor and designer can also be seen in films such as ‘Harry Potter And The Order Of The Phoenix’, ‘Harry Potter And The Half Blood Prince’ and ‘Venom’.
Presentations
Key Events
Keynote
‘From VFX to Virtual Production—DNEG’s Paul Franklin on Lessons Learned in This New Filmmaking Paradigm’