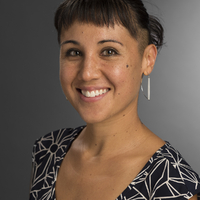 Biography
mari jaye blanchard is an independent animator and Assistant Professor at the Rochester Institute of Technology (RIT) in the College of Art and Design’s School of Film and Animation. Along with several of her own shorts, which have screened worldwide including festivals in Annecy, Melbourne, Paris, and Berlin, she has produced animations for Sesame Workshop, MTV, Comedy Central and the New York Foundation for the Arts (NYFA). She is a NYFA Fellow, an Asian American Arts Alliance Urban Artist Initiative (UAI) Fellow, and a co-founder of the NYC animation collective Family Camp.
Presentations
VR Theater
Swing