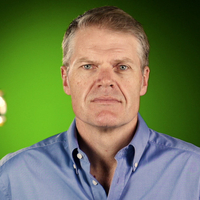 Biography
Mike has a B Sc. in Pure Maths from the Sydney University where he also did his Masters and he now has Doctoral fellowship. His research is exploring using interactive photoreal faces in new forms of Human Computer Interfaces (HCI). In other words, he is looking at deploying realistic digital companions and embodied conversational agents. This work has a special relevance for aged care and in related medical applications such as stroke victims, and those with memory issues. Face to Face communication is central to human experience and for many sections of the population a digital face may prove a much better metaphor for computer human interaction than just folders and files.

Mike aims to help take technology from the cutting edge film industry and apply it in these new exciting areas. Mike has previously worked in film and TV R&D and in production, winning an AFI and being nominated for an Emmy Award. He has worked as a compositor, vfx supervisor and second unit director on various TV shows. He is perhaps best known for his work as a writer, consultant and educator with the web sites fxguide and fxphd which explore technology in the film industry.
Chair of Sessions
Featured Sessions
Key Events
Digital humans are back! Creating and using believable avatars in the age of Covid – Part 2

Featured Sessions
Key Events
Digital humans are back! Creating and using believable avatars in the age of covid – Part 1