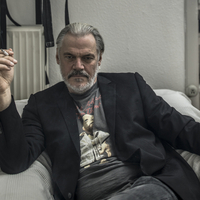 Biography
Born in 1959, Christian Lemmerz has studied classical sculpture at the Academy of Fine Arts Carrara, Italy (1978-1982) and at the Royal Academy of Fine Arts in Denmark (1982-86). Since then he has been awarded several grants, including the Eckersberg Medal in 1998 and the Thorvaldsen Medal in 2009, both by the Royal Danish Academy of Fine Arts, and the life long honorary Grant by the Danish Arts Foundation in 2010. Currently residing in Copenhagen, Denmark, Lemmerz works with such media as sculpture, installation and photography and has in parallel increasingly moved into performance, video, and recently VR.
Presentations
VR Theater
Locus Solus