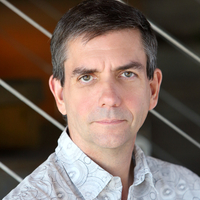 Biography
As the Senior Director of Software R&D at Digital Domain, Doug leads a world-class team that develops software and conducts research to advance the artistry and technology for feature films and new media of all kinds.

Doug has won two Academy Sci-Tech Awards: one for "Track," a groundbreaking computer vision system developed in 1993 and still in use today; and for Digital Domain’s fluid simulation system which set the standard for large-scale water effects when it was released in 2001.

Doug is an active member of the Visual Effects branch of the Academy and is the chair of the Academy’s Sci/Tech Awards Committee.
Presentations
Featured Sessions
Key Events
Autonomous Digital Humans and Artificial Intelligence