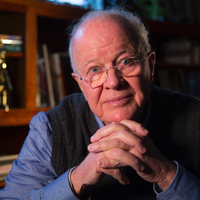 Biography
A self-confessed “geeky creative,” Doug Trumbull is a VFX legend and pioneer, who has been at the forefront of visual effects for decades. He was responsible for the dazzling special photographic effects of 2001: A Space Odyssey and was the Visual Effects Supervisor for such classics as Close Encounters of the Third Kind, Star Trek: The Motion Picture and Blade Runner, each of which earned him Academy Award nominations. Among his many accolades, Trumbull is the recipient of the Academy’s coveted Gordon E. Sawyer as well as Scientific and Engineering Award for the creation of the 65mm Showscan camera system., the VES Georges Méliès Award and was one of the inaugural inductees into the VES Hall of Fame.
Presentations
CAF - Panel and Production Talks
VFX Pros: Home Edition - At Home with VFX Pioneer Douglas Trumbull, VES