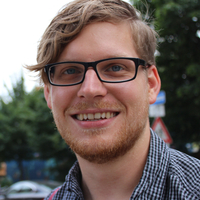 Biography
Eike Langbehn is Creative Director and Co-Founder at the independent VR studio Curvature Games. Besides, he is lecturer for game development at University of Hamburg. He did a PhD in computer science at the Human-Computer Interaction group at the University of Hamburg. Before, he worked as a Unity3D developer in the games industry. His research is focused on perception and locomotion in VR, especially redirected walking, and was published in the most competitive conferences of the field including ACM SIGGRAPH and IEEE VR. He won several internationally renowed awards and is regularly invited as a speaker at events and gatherings.
Presentations
XR
XR Q&A
Frozen Factory: A Playful Virtual Experience for Multiple Co-Located Redirected Walking Users