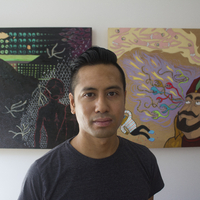 Biography
Fred Casia, a Canadian born Filipino, is a graphic designer, animator, director, producer, illustrator and visual artist from Montréal. He was a founding member of The Parnell Fine Art Collective, an active member of the YPF (Young People's Foundation), as well as participating member of En Masse, through which he has exhibited artwork for several years, including outdoor art installations for the Osheaga music and arts festival, and several exhibitions for the Musée des beaux arts de Montréal. In 2017 he along with 5 other filmmakers formed Astroplastique, a free-form collective seeking to create a fertile ground for collaborative, animation-based work and pedagogy, including animation work for Sesame Street, Ted Ed, the United Nations, as well as workshops for multiple National Film Board of Canada filmmakers. He has worked on documentary and animated productions with the NFB including the Oscar nominated animated short Wild Life directed by Wendy Tilby and Amanda Forbis, the Oscar shortlisted animation If I Was God directed by Cordell Barker, The Fruit Hunters directed by Yung Chang, as well as his own stereoscopic 3D animated short Marvin Parson’s Inner Wild Wilderness, which was part of the 6th edition of the NFB’s Hothouse. He also worked on Manic VR as a creative director, which premiered at the Sheffield International Documentary Festival and has won numerous awards including the Dok Neuland Award at Dok Leipzig, the 2019 Prix Ars Electronica Golden Nica, and a 2019 Canadian Screen Award nomination for Best Immersive Non Fiction Experience.
Presentations
CAF - Panel and Production Talks
Hybrid VR techniques of The Orchid and the Bee